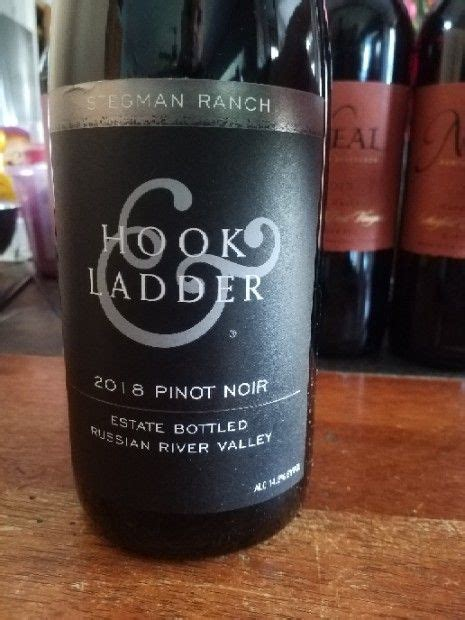 Ruby hue with aromas of candied red berry fruit, a touch of strawberry, and vanilla.

Palate--Light bodied with lovely pinot grace with lots of strawberry, vanilla nuances, a minute touch of oak in the finish.

I am not sure what this cost because it was a gift.  It is rather classic Sonoma Pinot, drinks well made, and easy as a lovely aperitif or with lighter fare. Well made and enjoyable so raise a glass. 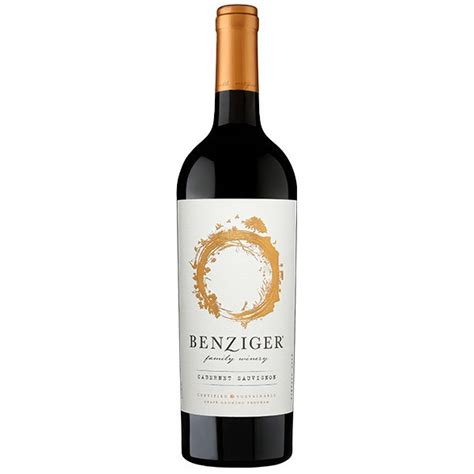 On opening there is a lovely sweet scent of summer berries, in the bowl there is unique, spruce aroma with ripe spicy currant, black berry, ash, and forest floor enticements.

I reviewed this wine not long ago and it was nothing like this. Could be "bottle variation" or more likely my palate was off with a sub clinical cold or something in the back ground.

Sonoma cabernets tend to be nice value Cabs without the "Napa markup." This lingers for a good while and begs for another drink.  At the $18 price point it is a nice value and if you find for less as I did, grab a couple and lay one down. You'll be rewarded again in a couple years. So raise a glass.

This Chilean Merlot (Maipo Valley) is a med. purple to garnet with aromas of sweet fruit reminding me of ruby red grapefruit, with chocolate nuances, and a very floral edge.

Palate--Milk chocolate at the beginning, with minerally, spicy mid palate, and loads of more fresh berries at the end. The wine finishes with a nice, textured ending and some resilient fruit.

This is remarkably different in style from the Merlots I am used to. It is lush, structurally sound, and I will pair it with a pasta with tomato based sauce.

I paid $8 for what is normally a $16 wine. It is tasty, has a nice "zippy" quality to it which makes your tongue come alive so raise a glass!

I paid $9 for this $17 blend and it drinks really easily and makes you want more.  Pairing it with grilled marinated short cut steak...  Raise a glass! 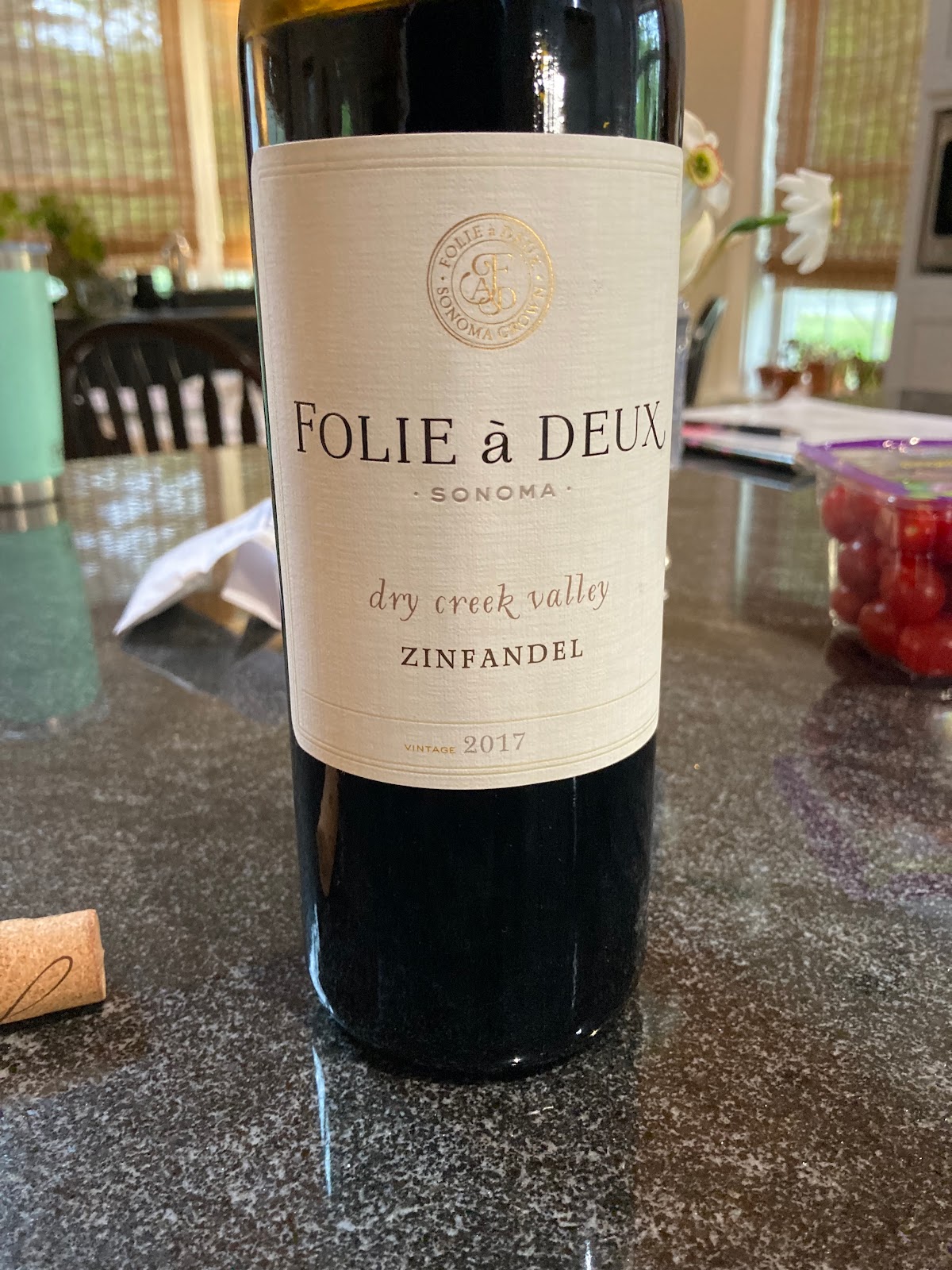 Medium ruby hue with a horrid bouquet of wet cardboard, classic of a "corked" wine. So disappointing...
I rarely run into corked wines but when you do, there's money down the drain...
Palate--underneath all the yucky bouquet is some decent fruit, bright red with loads of rich spices. It finishes however with more wet cardboard.
Sonoma is my favorite AVA for Zins and Dry Creek Valley is a fave of my fave. Despite the crappy bouquet I am going to drink this with  my bacon and onion tart "pizza." With heating oil at over $6 a gal and gasoline at nearly $5 a gallon, I need something to take the edge off the evil being perpetrated against the world. Raise several glasses.......................
Posted by PB at 6:12 PM No comments: 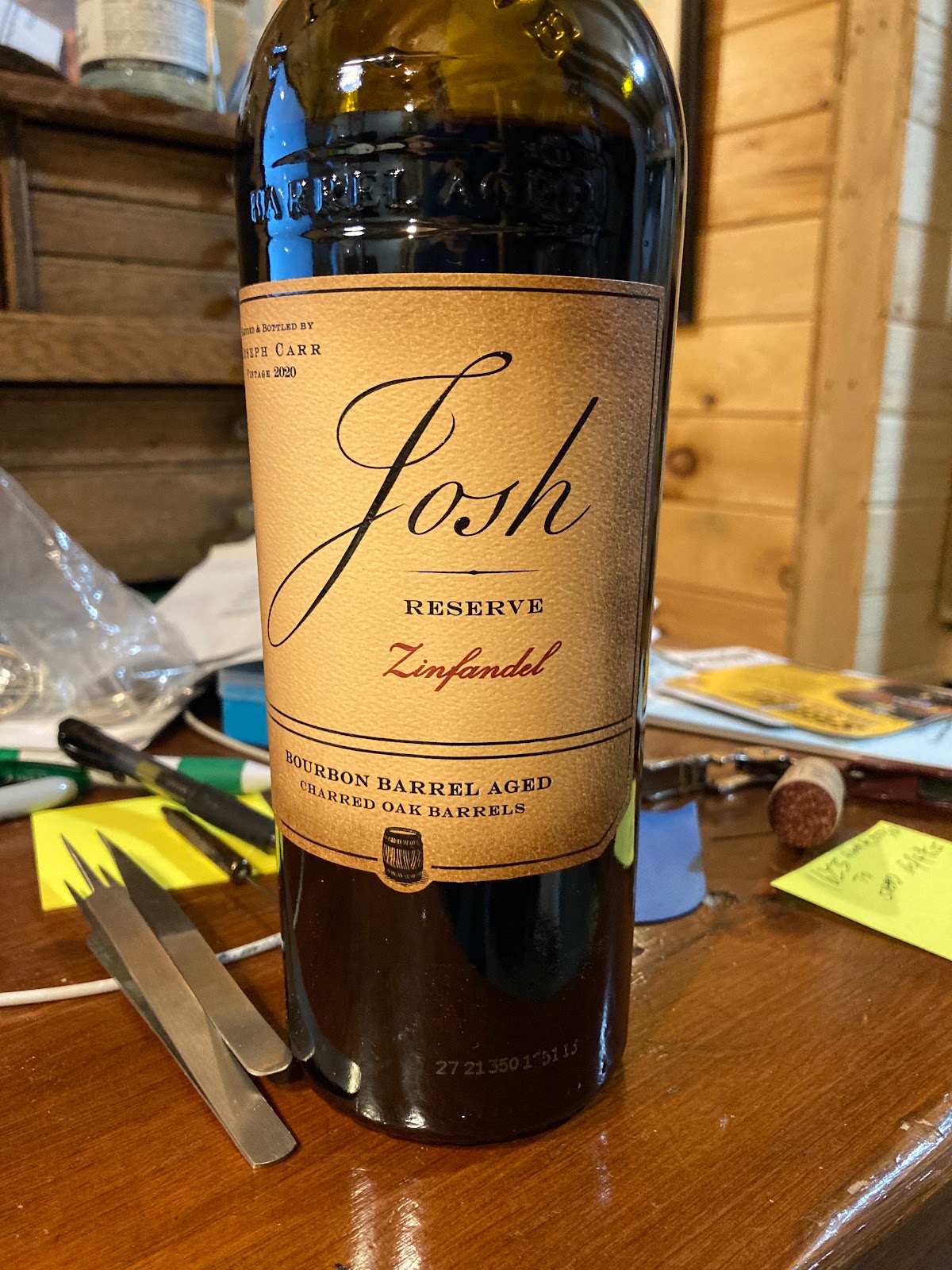 Deep Purple hue with aromas of Wonderful "All Spice" on the first swirl, subdued Zinfandel fruit, maybe a touch of cinnamon and clove.

Palate--Nice first impression with boat loads of ripe dark berries, and big steely front that almost eclipses the fruit. Mouth Watering acidity, and slightly chunky tannins with a finish that hangs on.

I am not sure how I think about the bourbon barrel aging but let's face it, all wine is manipulated and so whether it is an old bourbon barrel or French Oak, the point is to impart complexities to the finished product. I have only ever had a cheap cabernet aged in a bourbon barrel and I think it enhanced the particular wine.

Around $18 for this wine and I am glad I had a chance to give a whirl. It's a bit steep for the bottle but then again it's all relative.  Raise a glass. 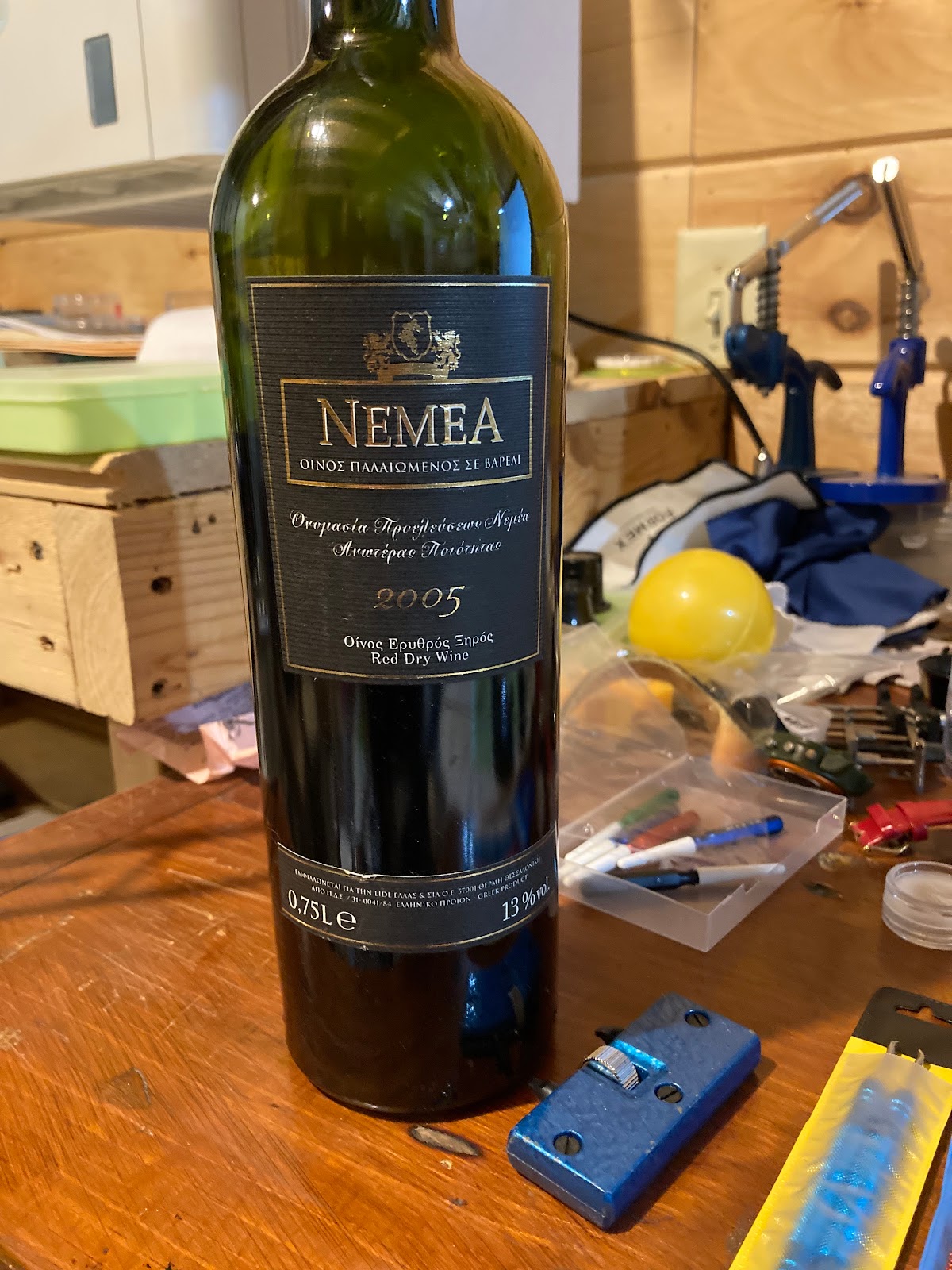 Above the rim there is a faint lingering memory of the red fruit from which it came. More prominent is the classic aroma of old red wine which to me smells like a slightly burn caramel. I like the bouquet!

Palate--In the mouth, it is sharply acidic and sour. I did not want to swallow it and emitted it into my yard. The finish was the best part of the quaff and no pun intended.

From what I am tasting, this was probably a pretty decent, if not very decent wine from the ancient lands of Greece. The person who gave it to me had deep Greek connections and obtained it on it one of his trips and just left it to age.

This Greek wine was given to me having found it stashed away at her home forgotten about. I did not have any expectations for this old Greek wine except to dump it. But every wine experience increases one's knowledge of the whole and so I was eager to see if it was even palatable.

Dark magenta with significant "bricking" at the rim.  (Bricking is what happens as a red wine ages and turns from purple, to red to a brownish red to brown.)  Bricking does not necessarily mean the wine is completely shot.

What surprised me was as I opened this bottle there were still faint remnants of "fruit" in the bouquet and there were no real "off putting" aromas; only what you would expect from an old wine. Optimistic, I sipped and was making a face at the intense sourness of the wine but it was not however vinegar...yet. Again there was a very faint taste of red berries but it was subtle!  As I spit the wine out, the most pleasant aspect of this geriatric creation was the finish. It actually had a not horrible ending.

These are great learning experiences that cannot be duplicated. I would love to try a younger version of this bottle.  If it was even drinkable at this age, I say it's probably worth "raising a glass!" OPA! 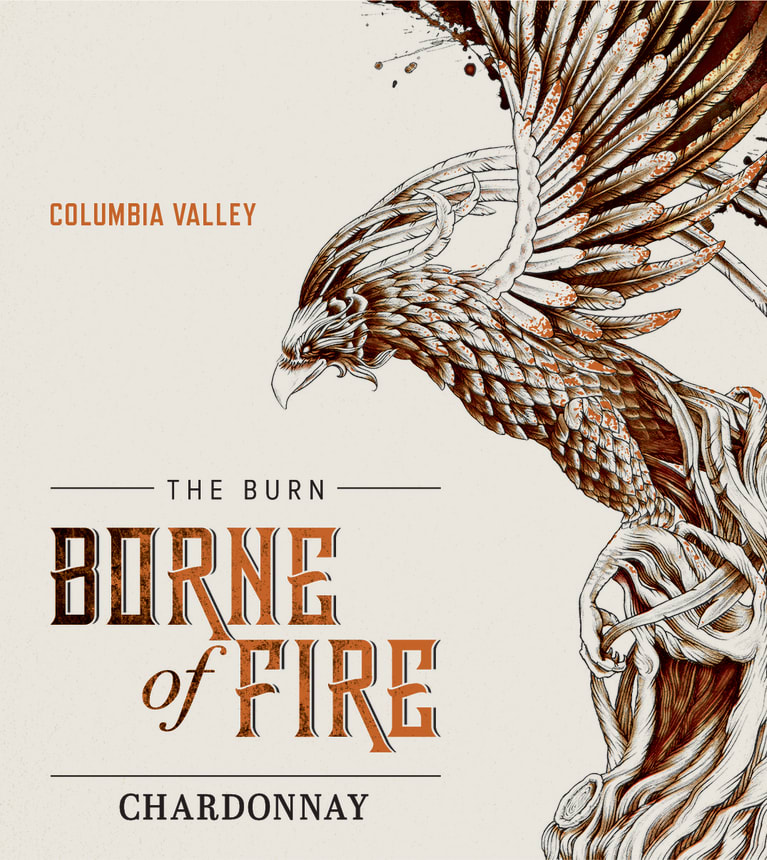 This wine needs time to breath and I will update when it has.

I may give this wine another try, but for now it is a "pass it by."

The Burn is a new area of the Columbia Valley **AVA and this is my first experience of this wine and this area.

*Brettanomyces is a yeast that can taint an otherwise good wine. It presents carrying aromas like band-aids, old gym shoes or sweaty gym socks... Not what you want in your wine experience. This mat be a one off and it isn't very strong. But given the whole profile of this Columbia Valley wine I will pass on it. (And I tend to like Washington state cabs)

** An AVA is an American Viticultural Area legally established for which I wine made from grapes from any particular AVA has the pleasure of "advertising" where their grapes from. To be designated an AVA the fruit from the land and/or the land must meet certain standards set for the particular AVA. 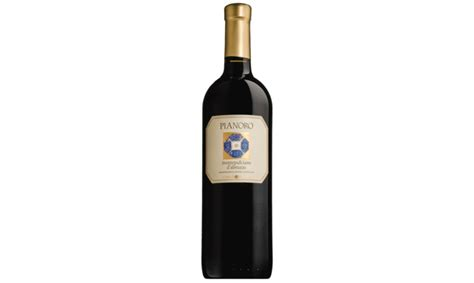 The bouquet of this lovely quaff is truly seductive, elegant and understated yet definite! Lovely aromas of ripe red berries that have an almost floral edge to them, with violets, and spicing that is subtle with finesse. The hue is a lovely dark garnet.

Palate--Mouth filling flavors, silky tannins and structure, mid palate gives rise to big, ripe berries with a lip smacking acidity that comes in after a moment.  It finishes a bit abruptly but reminds you of what was there and what awaits another sip.

This is a brilliant wine; delicious, well made, tantalizing, and a great food wine or by itself.  I am paring this tonight with grilled bourbon marinated steak tips. As the market continues to tank, I put my trust in the Lord and my lips to the glass which I will raise tonight.

My wife grabbed this for me as a surprise and just left it in my cellar. The prices I am finding on line cannot be real.  They are showing something around $5.00.  IF that is anywhere near right; buy a case nad raise many glasses! 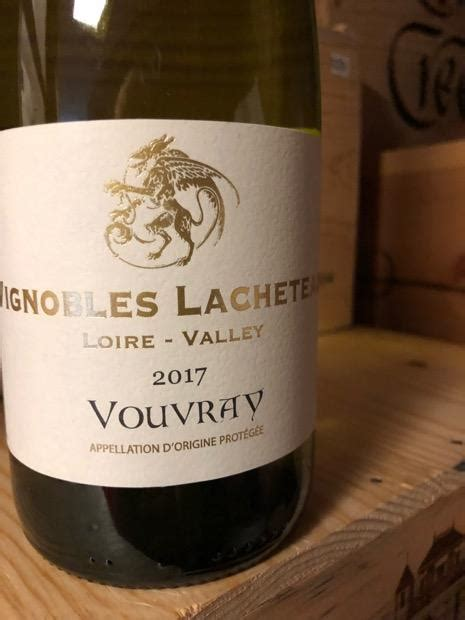 Palate--Big burst of fruit out of the gate with a decent foundation of acid to carry the lovely fruity, green melon, green apple and finishes with a really nice lasting pear nuance.

I love Vouvray!  Chenin Blanc is the grape of the Loire Valley and it has long overcome the grape's cheap, jug wine reputation coming into its own about 25 years ago. I adore it.

At $12 and cheaper at Trader Joes, it is a must buy. Chill it down on that hot summer day pool side and enjoy it to the max! Raise a glass! 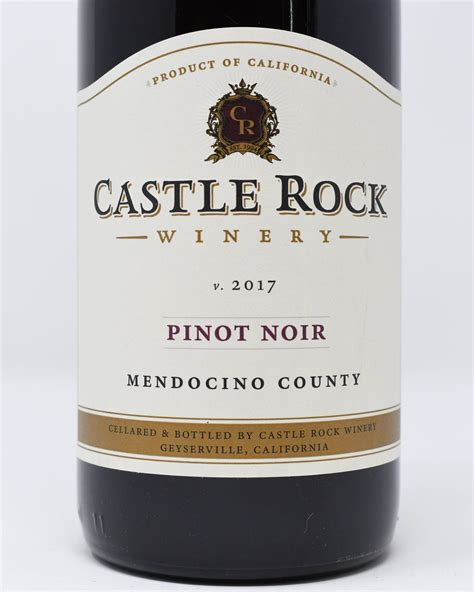 Palate--Nice first impression with a nicely structured foundation rich in wonderful beams of various red fruits, lovely spices, and a lingering finish of a slight woodiness.

Castle Rock makes super valuer Pinot Noirs that everyone can afford. They make numerous appellations all around the $10-$15 price point and win plenty of medals for their artistry.

Pairing this tonight with chicken stir fry but will pair with many things and cheeses or all by itself so raise  a glass.

Bright young berry fruit immediately on opening, with simply cherry loveliness, above the rim and the lightest touches of cinnamon in the bowl of the glass. The hue is a purple youthfulness edging slowly to a garnet edge.

This previously reviewed wine is a treat and special creation at the $14 price point. Give it an hour or more to open up and the lip smacking tannins will turn relaxed!

Pair it with cheeses of all stripes, Italian spiced food, with tomato based sauces and pretty much everything else but Asian and Indian food. I will be pairing this with grilled short cut steak.

I love this wine and will buy it again in a heart beat so "raise a glass!"