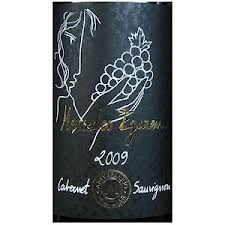 Pours quite dark for a Cab at this price point.

Bouquet--Some nice plum and cigar box aromas trying to fight through the slightly corked musty smell of wet cardboard. Even with that there are notes of dill and cedar.

Palate--Slightly sour and somewhat austere fruit but what's there is good. There is even some interesting spice notes as well.

Most people would not recognize this as being flawed and even with my hypersensitive nose and palate to cork taint, it is marginal but definite.

I grabbed this since it was a 100% Cabernet varietal from Spain which I don't know if I have ever had one before. I paid $9 for it and if this wasn't corked it would probably show as a really decent wine. If I lived near the store I would grab another to give it a 2nd chance and wouldn't hesitate to return it if it was. As I have written before, I almost never have a problem with a store receiving back a bad wine.

So this is worth another go! Raise a glass.