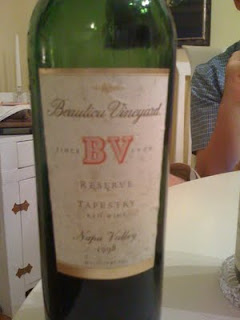 Garnet hue with a solid rim with a bouquet that is fairly youthful with nice cedary laden red fruit, the slightest touch of licorice, and spice.

Palate--Surprisingly youthful with integrated flavors of everything this wine is.


I have been cellaring this wine for many years and was looking forward to a wine that had peaked and was ready to drink before it started sliding downward. (NW) of this blog was up for the weekend and we were both taken aback at how young this wine was still. I am usually very good about judging a wine's age from the bouquet and appearance in the glass and if I hadn't known what it was, I would have said it was 6 or 7 years old. This wine still has years ahead of it but is drinking great now.

I say the following with all respect to the good folk at the Wine Spectator to whom I look for masterful counsel and education. Several years ago Beaulieu had a TCA issue at their winery. (TCA is the abbreviation for a long chemical name which is a dreaded contaminant and can be the death of a winery's business.) Their wines were being scored strangely low around this time and this wine in particular received a score of 80 from James Laube of the Wine Spectator.


(NW) and I have had several of those wines from that time period and we have found them to be very good to excellent. Indeed, this wine--if we were scoring our reviews by points--we would give a score somewhere in the 90's! I don't remember what I paid for this but I would guess it was around $40.

The other point to make is that here we are in 2011 and this wine is not only holding well, but it might even still improve a bit. Which only means that determining how long a a wine will last can be a crap shoot even while there are objective considerations in making such determinations. With respect to the low BV ratings during their TCA years, it is possible that Mr. Laube has what is called a "super palate" and is sensitive to TCA where others might miss it entirely or even find it endearing as a musty or earthy taste no unlike what you might in typical Tuscan creations.

At any rate, this was a great experience and a definite raise a glass!
Posted by PB at 8:26 AM